The light in summer evenings is beautiful. 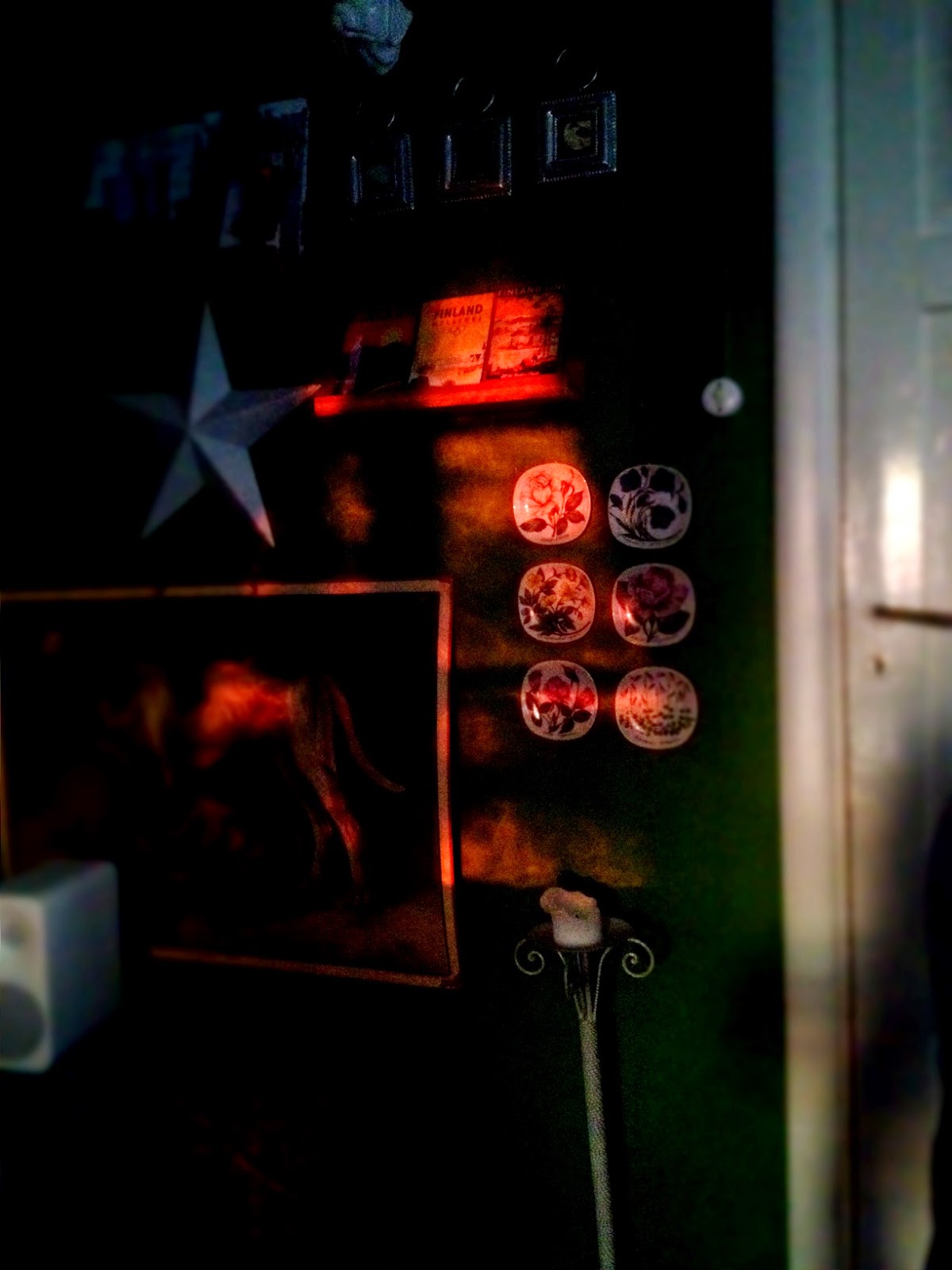 This fan is from 1940´s and my husband found it in a garbage bin at his work place. He picked it up just for decorative use. But yesterday it was so hot that we decided to try it out. And whaddoyouknow, it works just fine! I´m a fan. 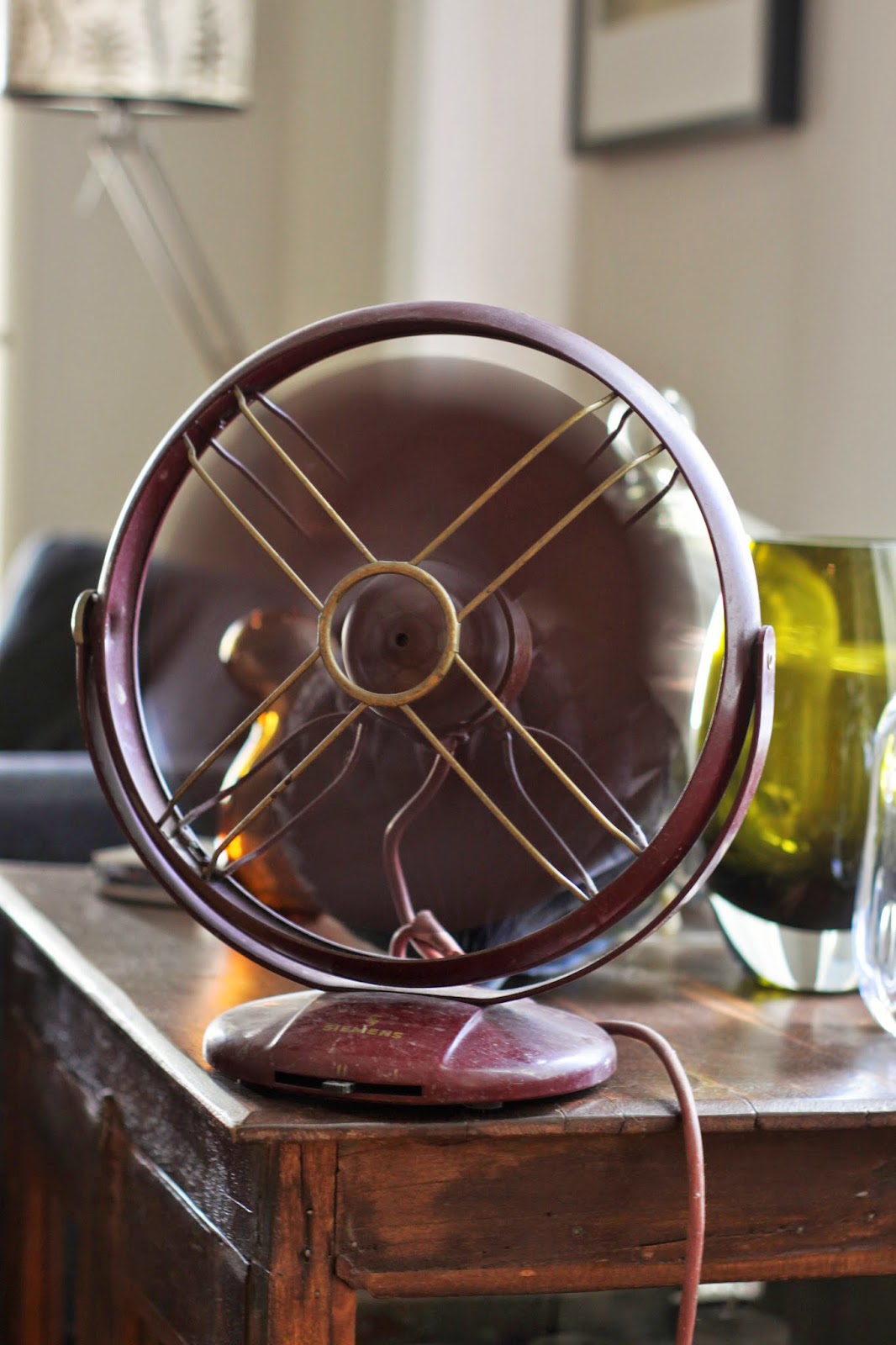 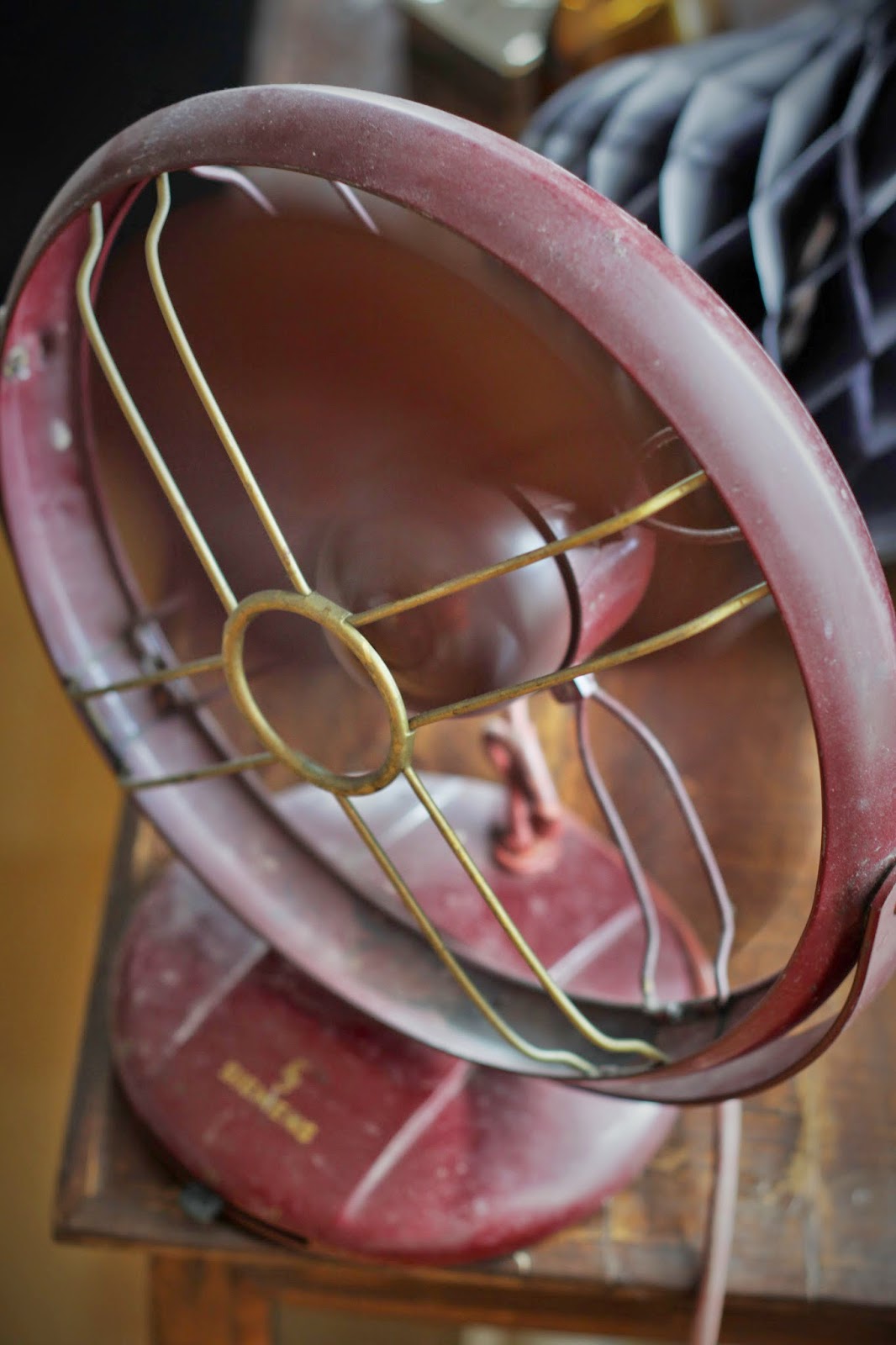 Our garden will really rock

I am waiting for a cooler weather - we have about 12.000 kg gravel, two square meters grey dice-shaped stones and three really large border stones. I would love to start improving our yard but it is too hot to shovel! 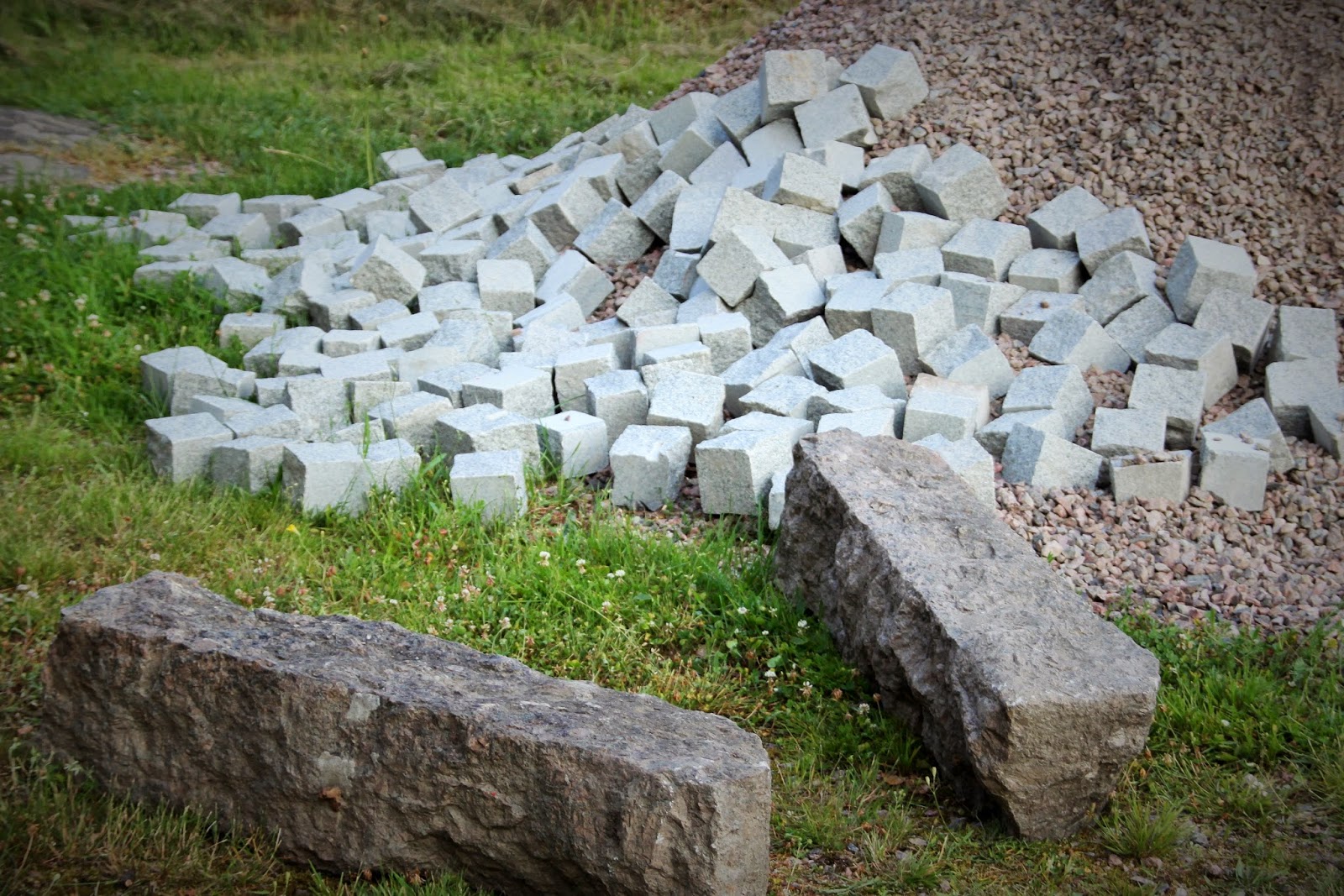 What do you do if you by chance get a day off from work? You go to a flea market, of course! My husband found these at Hietalahti flea market last week. 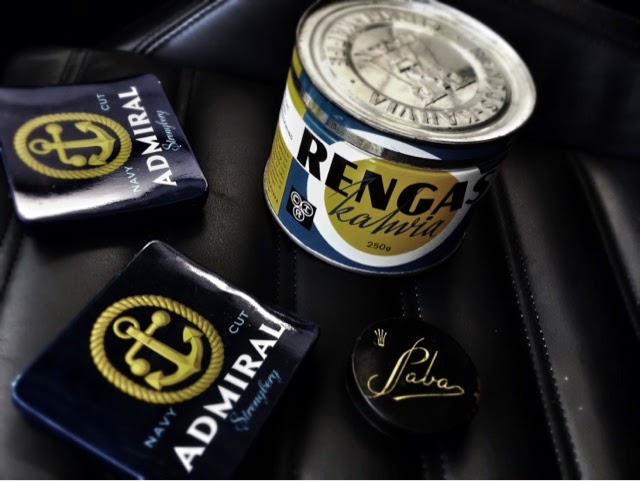 We got these windows from my husband´s work place. They are rather big, deliciously old and in a good condition. Let´s see how many years it takes before we do anything with them. 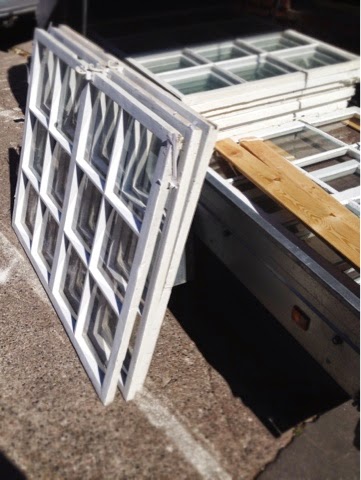 It has been a while since I last shopped at Stockmann. I went there yesterday and bought two frames for 9.50 euros and got them packed very nicely by a extremely polite young man. Nice change when compared to Prisma and flea markets where I have been shopping lately... 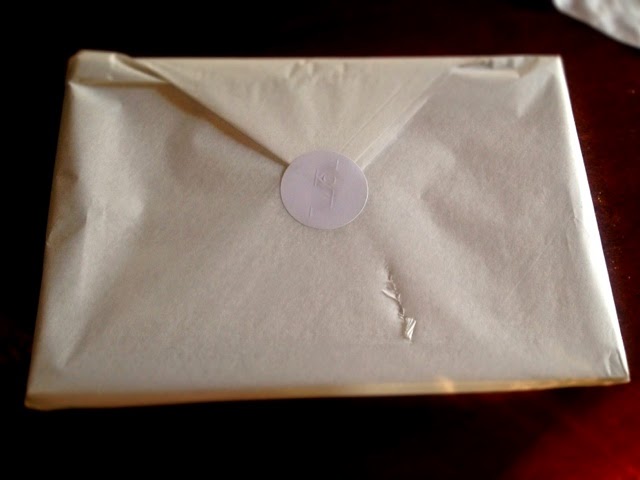 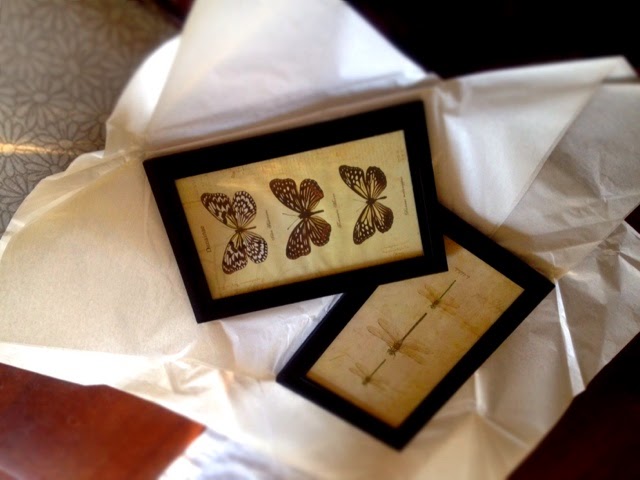 I picked most of the flowers here from the side of the road. The dark violet cornflowers I sowed in the spring and adding them to the bouquet makes the yellow flowers look even more yellow. The vase is from flea market (where else...). 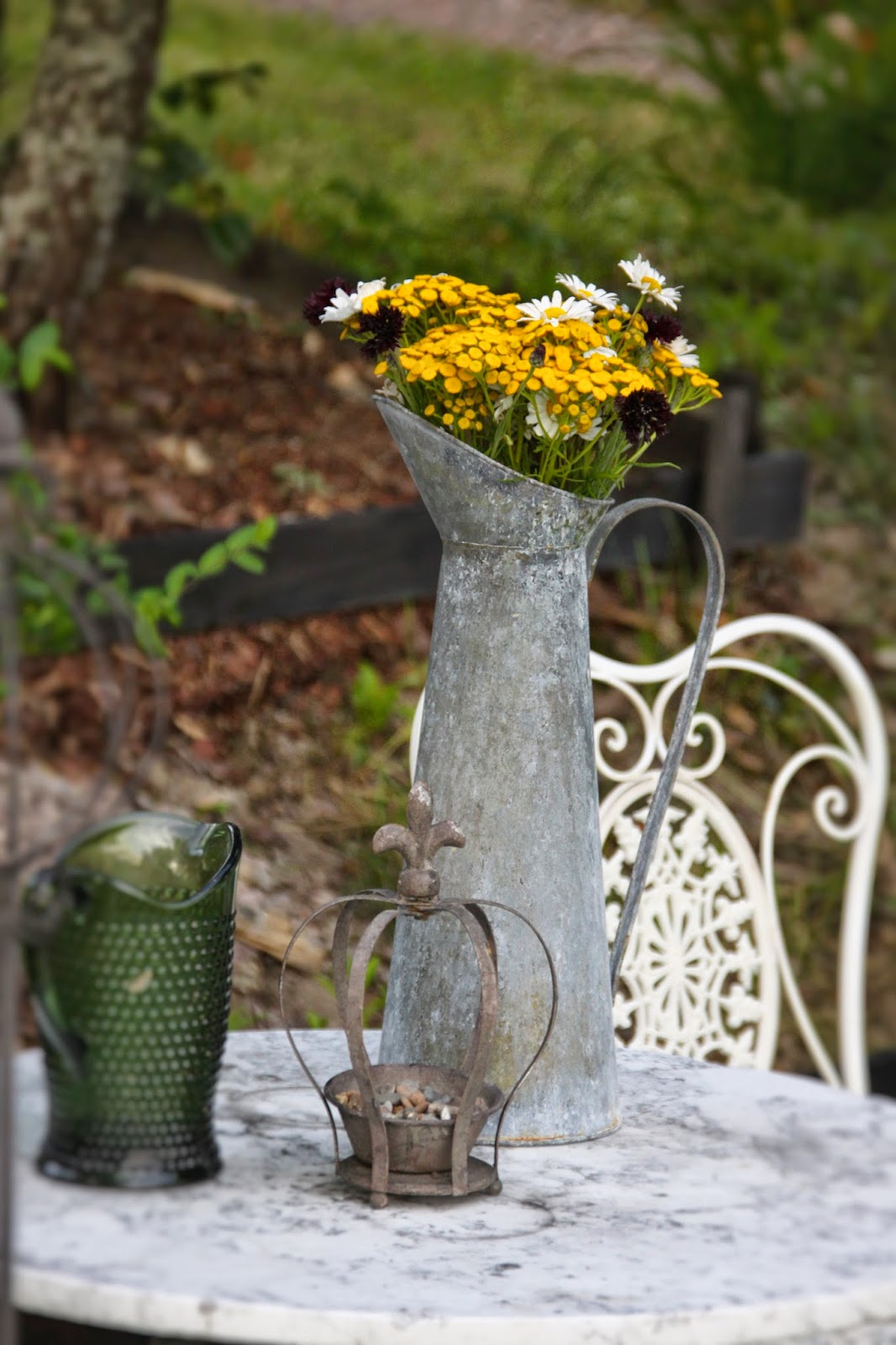 On a right path

The paths at our cottage are laid straight onto the lawn - we only took some turf off and laid the concrete plates to their places using no sand. And after only a couple of years the paths look just like I wanted them to, just like my grandmother's paths used to look, not too straight and not like paths / concrete plate installations at gas stations (or hospital yards) - never mind if the water stays on the paths as long as they don't look to clinical! 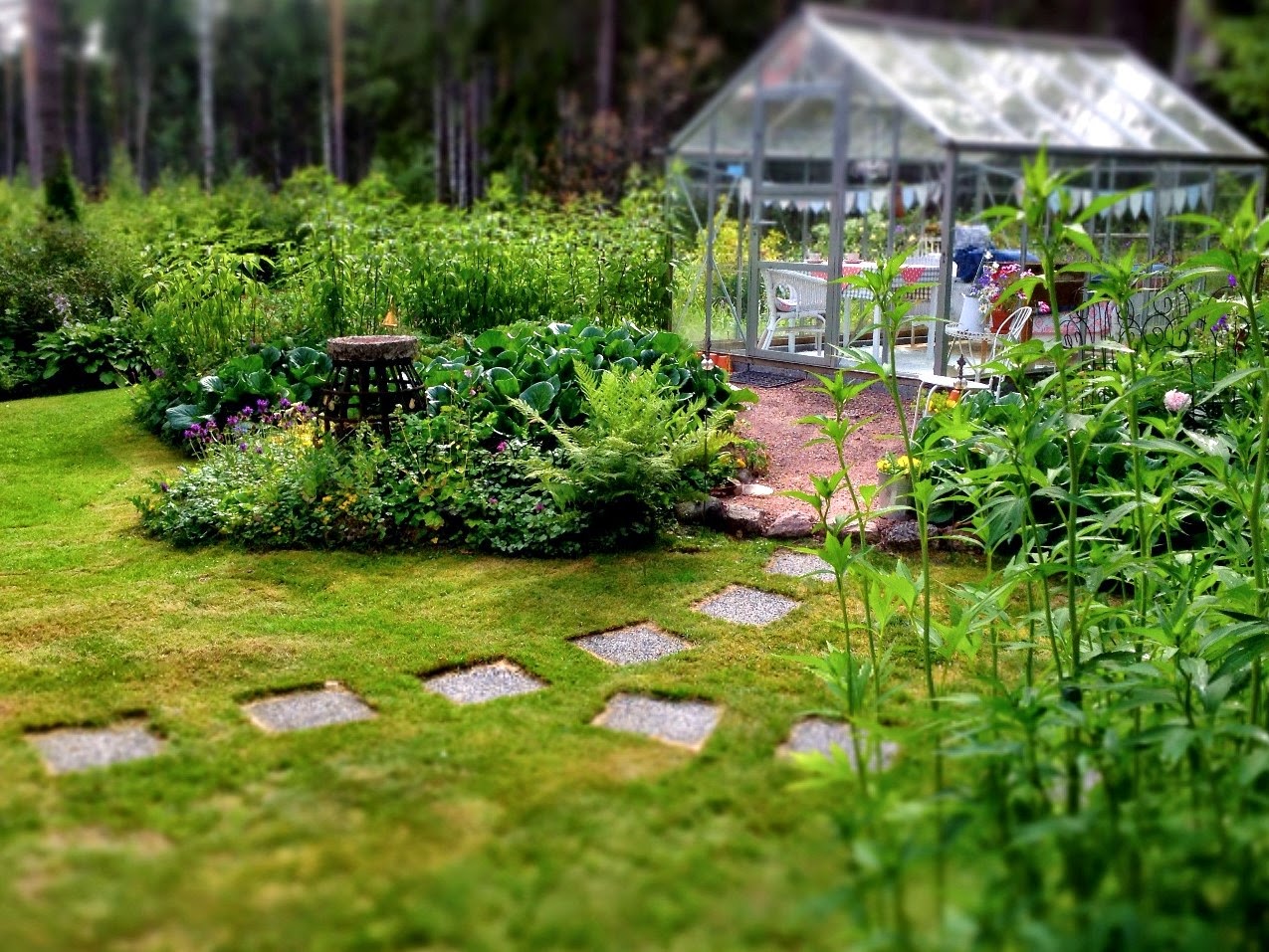 A piece of paradise

I went through photos from the early summer and came up with this one. I just remembered I love paradise lilies. They flower a long time and it seems that the lily bugs are not interested in them (yet). It is strange how you seem to love only those plants that are in flower right now and forget the ones that have lost their blooms (exception: peonies, you don't forget them soon). I got a couple of these from my aunt a few years ago and now it seems it would be possible to divide them in autumn to get some to Vårkulla, too. It is nice to have your own nursery! 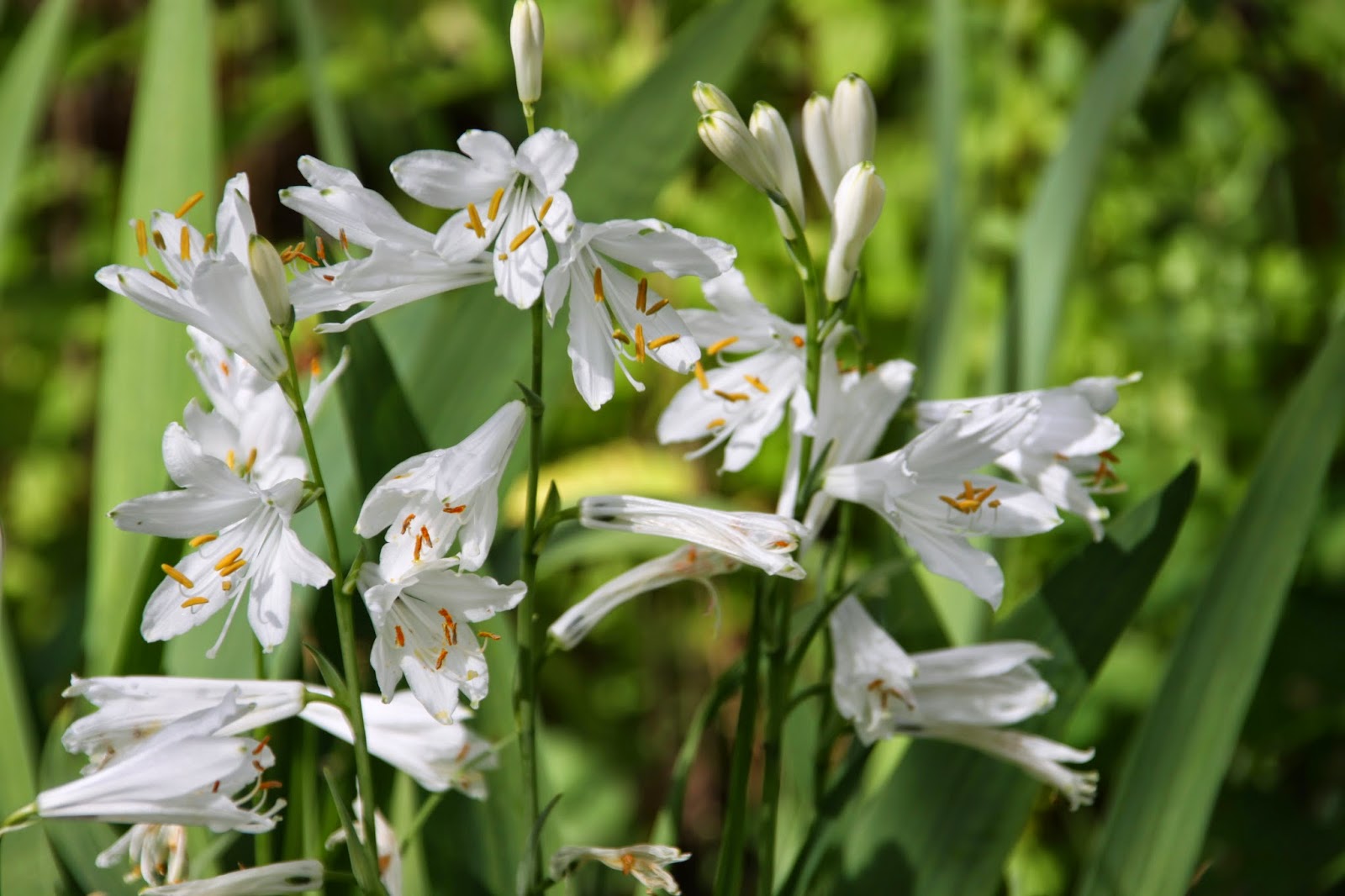 Something old, something blue

I got these blue glass balls from my cousin to sell at our flea market. I wouldn't have bought them from a store as they are a bit bright, but when you get something for free, you can try if they fit the general scheme and they did. So I won't sell them (yet). 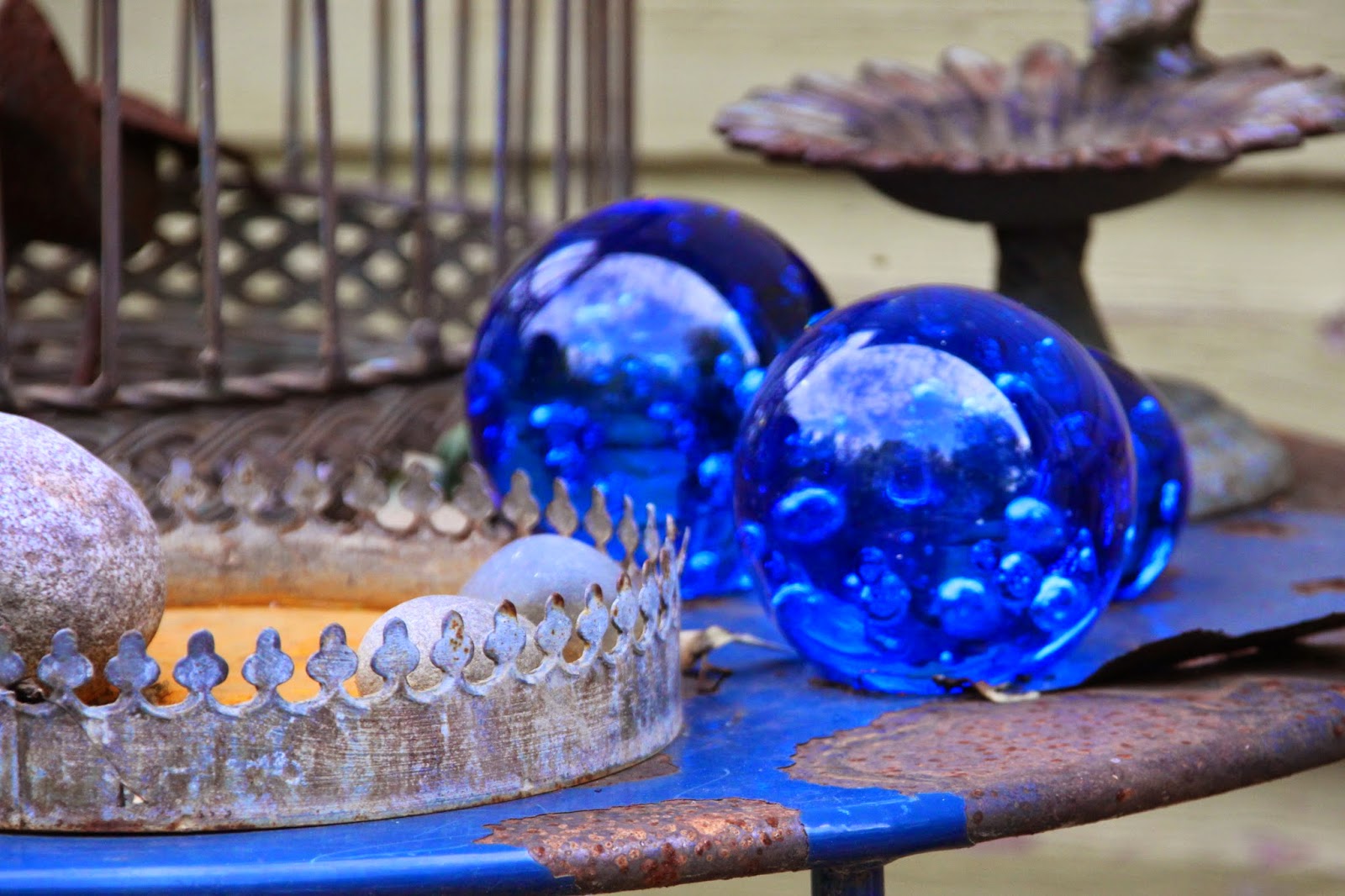 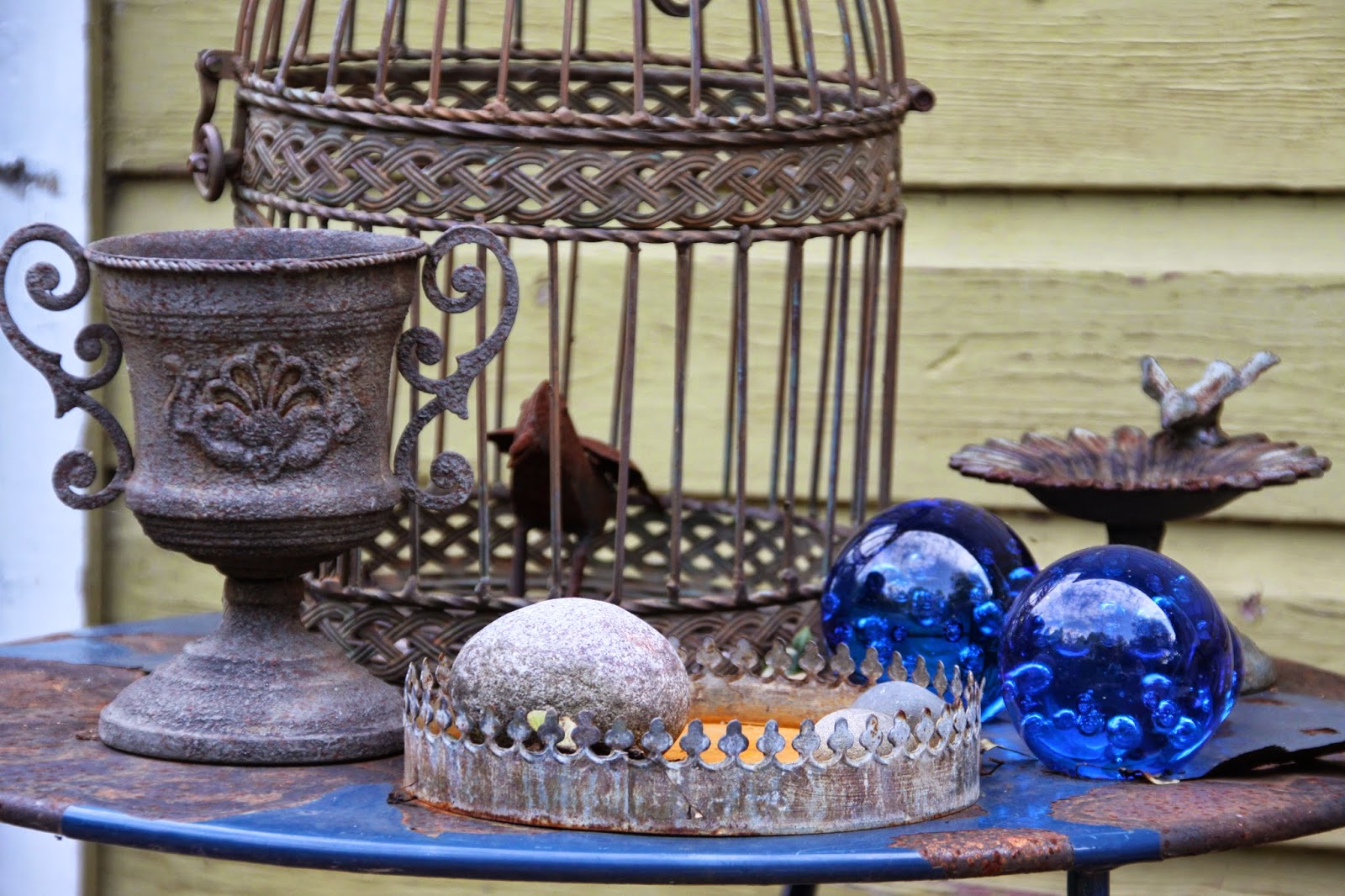 We have cultivated our meadow for about 10 years and then you see road sides that look prettier than your hard-worked-meadow... 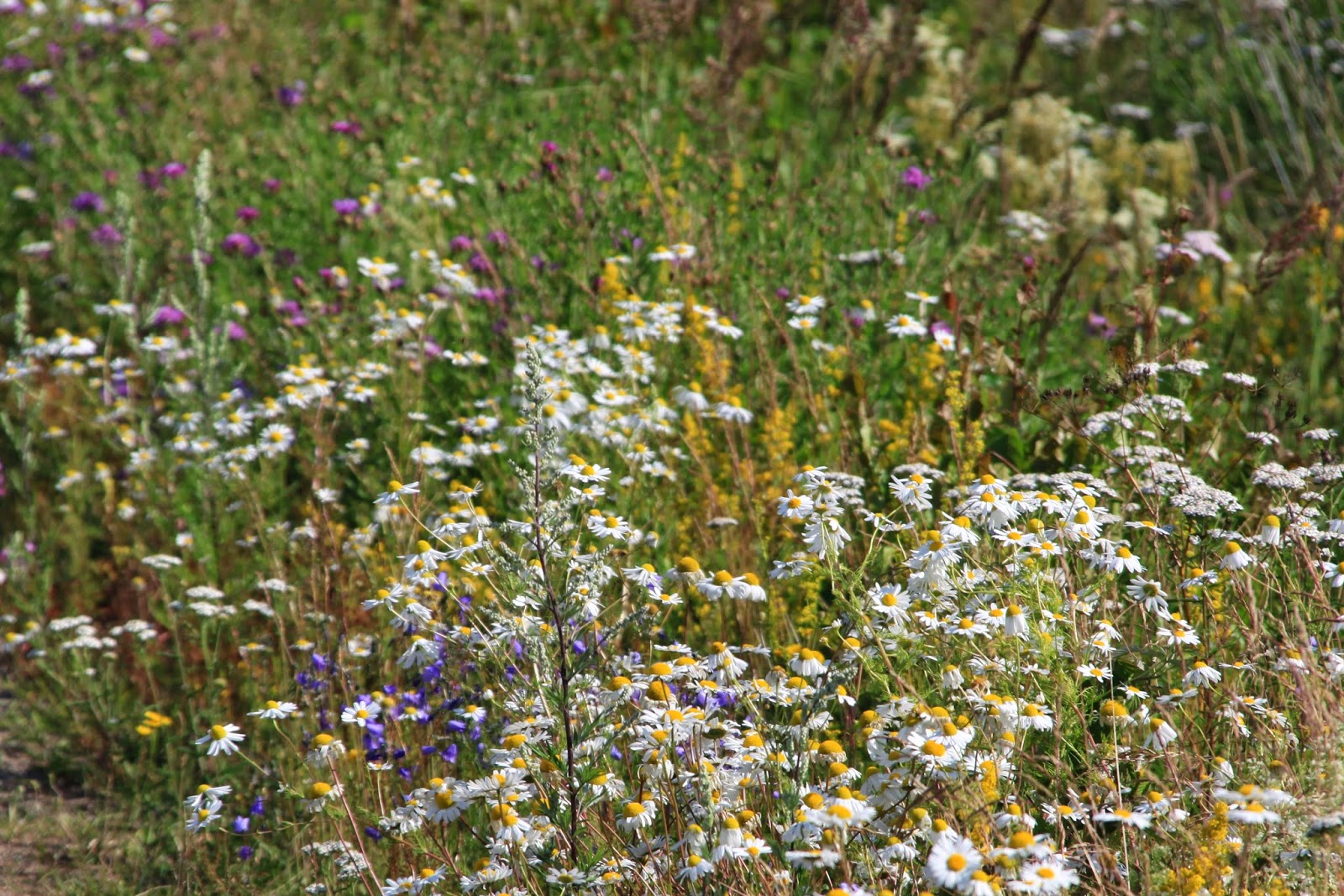 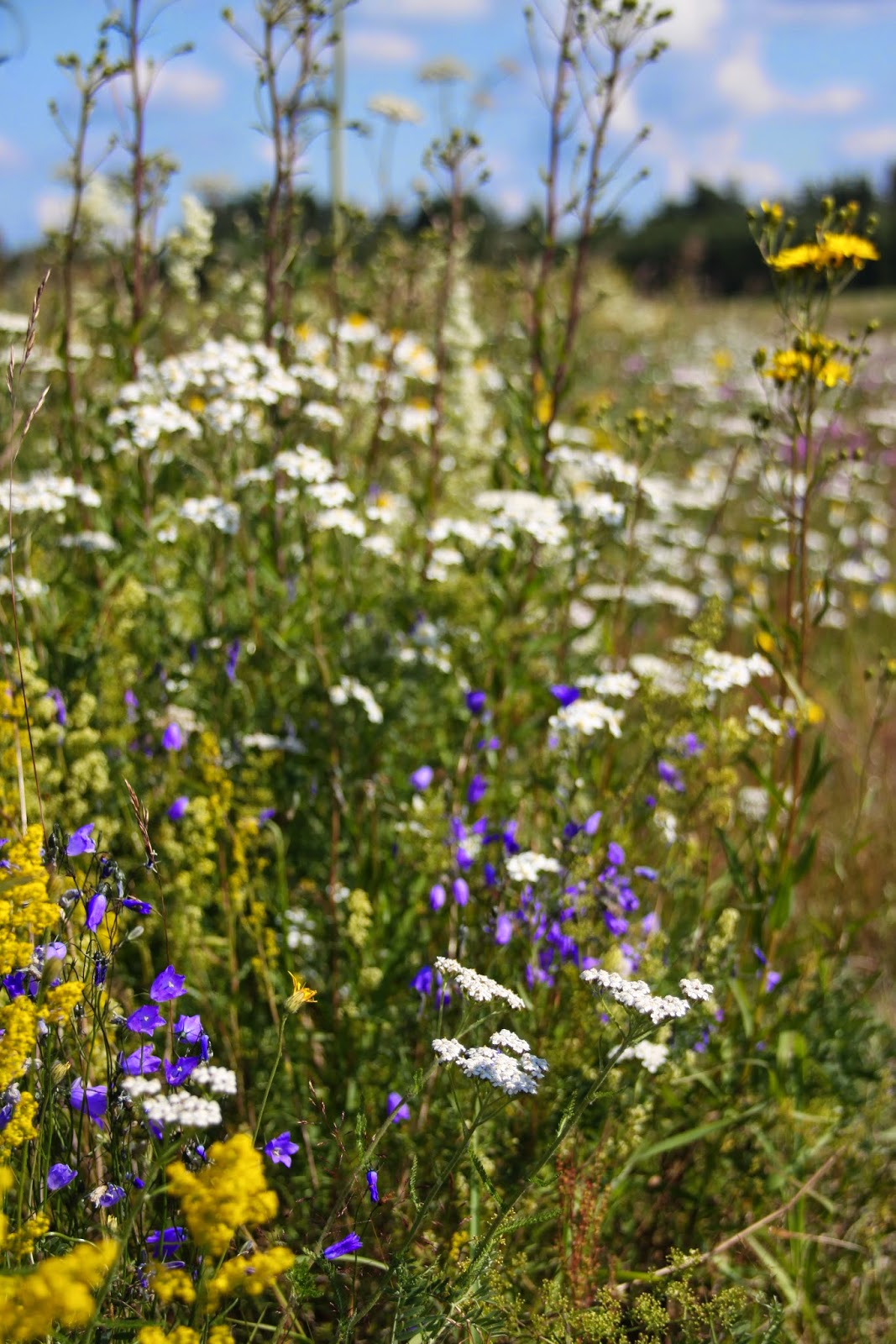 We had these green chairs and table in store and for some reason didn't take them out before yesterday. We had to carry the patio chairs to the lower yard when we wanted to sit in the early evening sunshine. Much easier now to enjoy the perfect summer evenings. 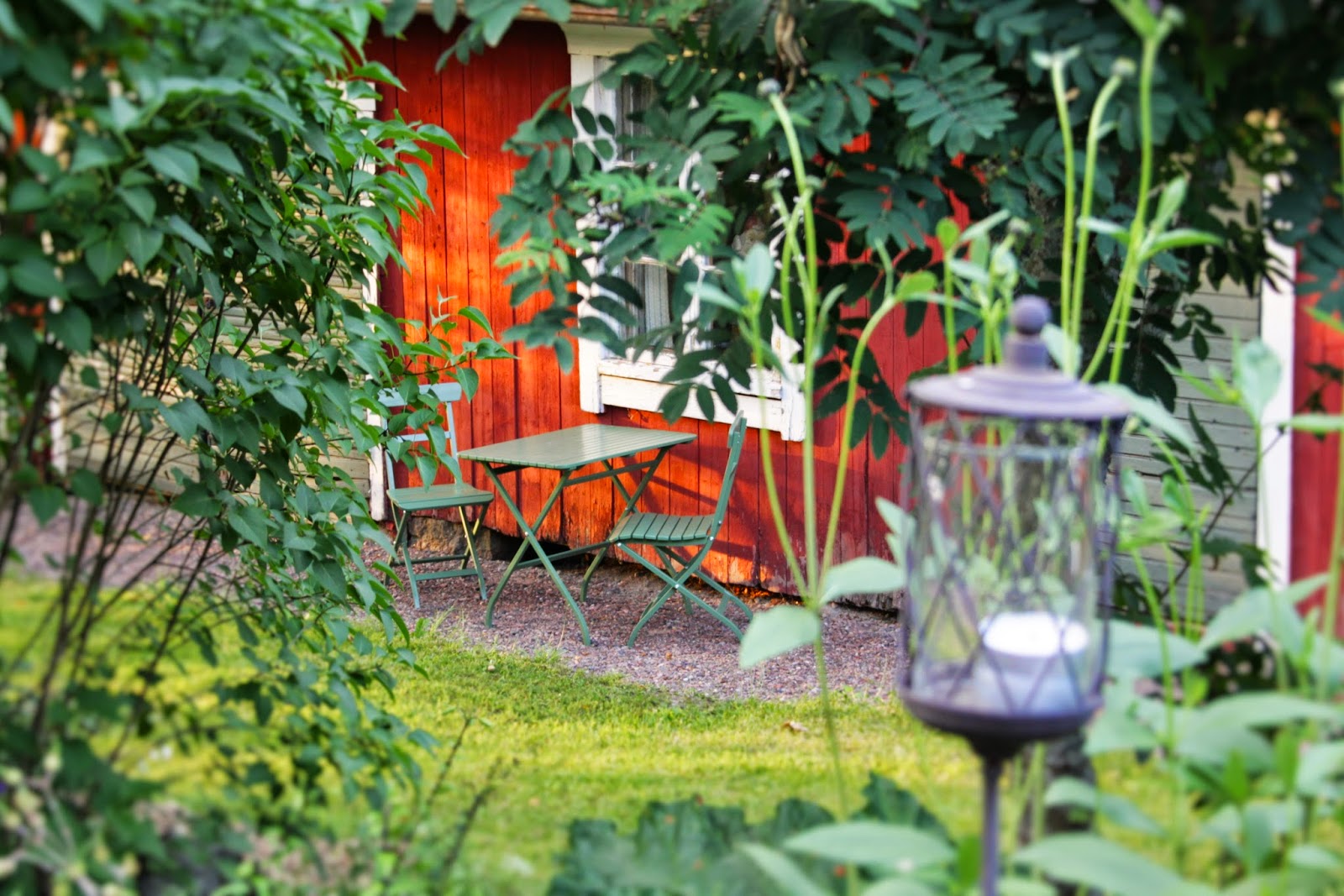 This is a view from our cottage roof to the front yard. 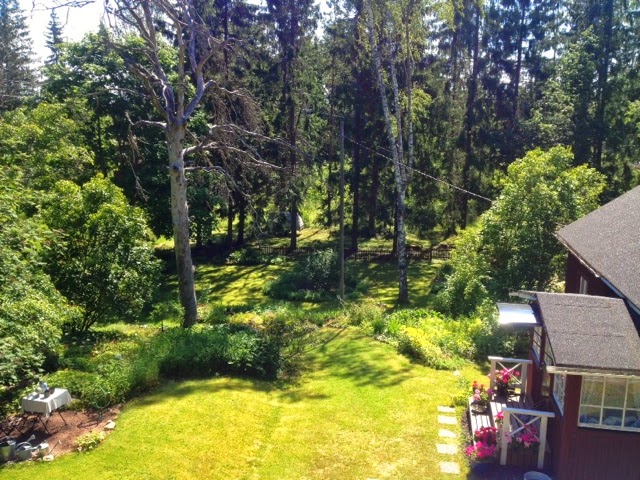 This summer our mock orange (pihajasmike in Finnish) has more flowers than ever. The mock orange's flowers are lot like an apple tree's but they are bigger and the flowering lasts longer. And I have to add that the fragrance is wonderful, especially in the evening. If you have room in your garden, I can warmly recommend this oldfashioned shrub. 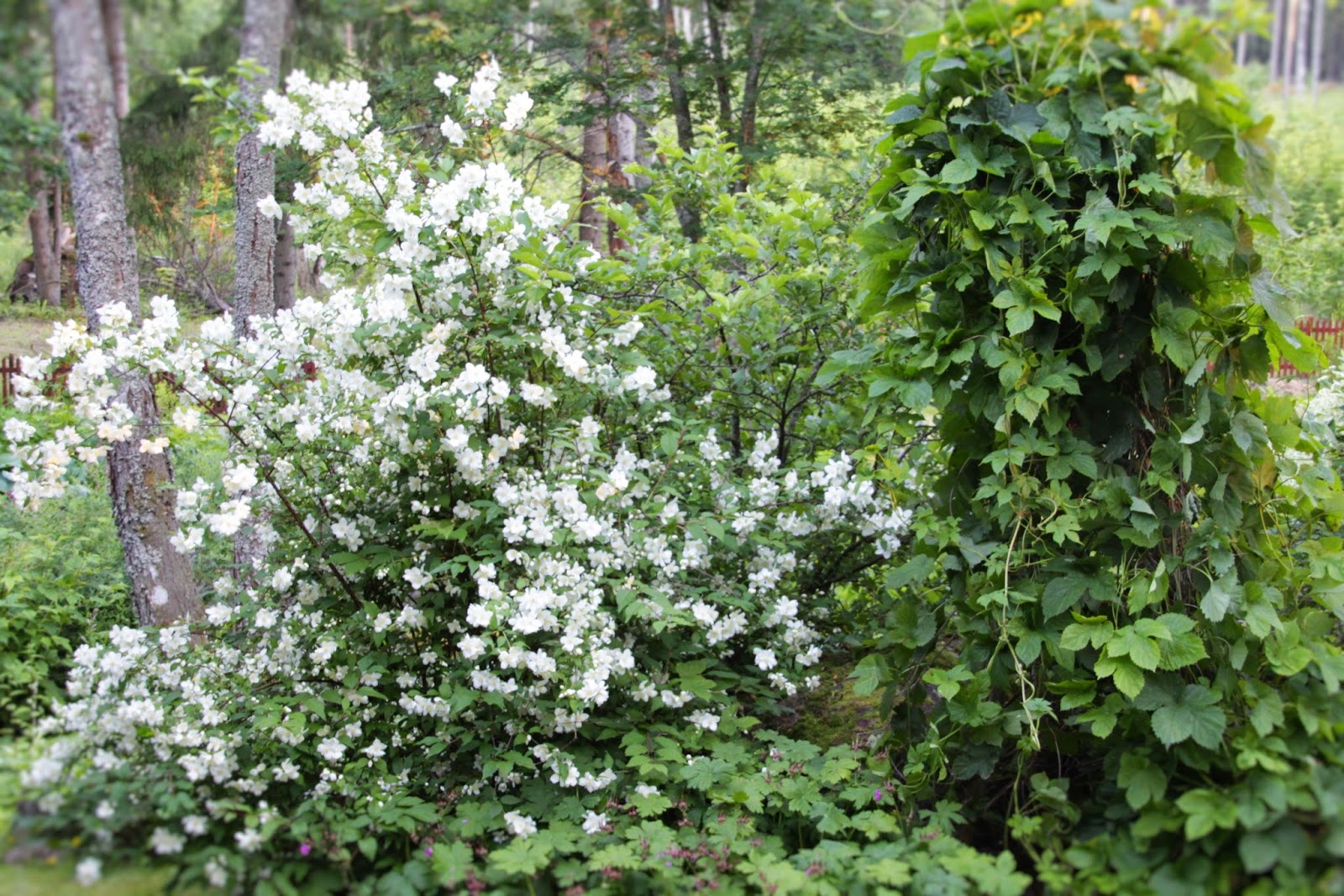 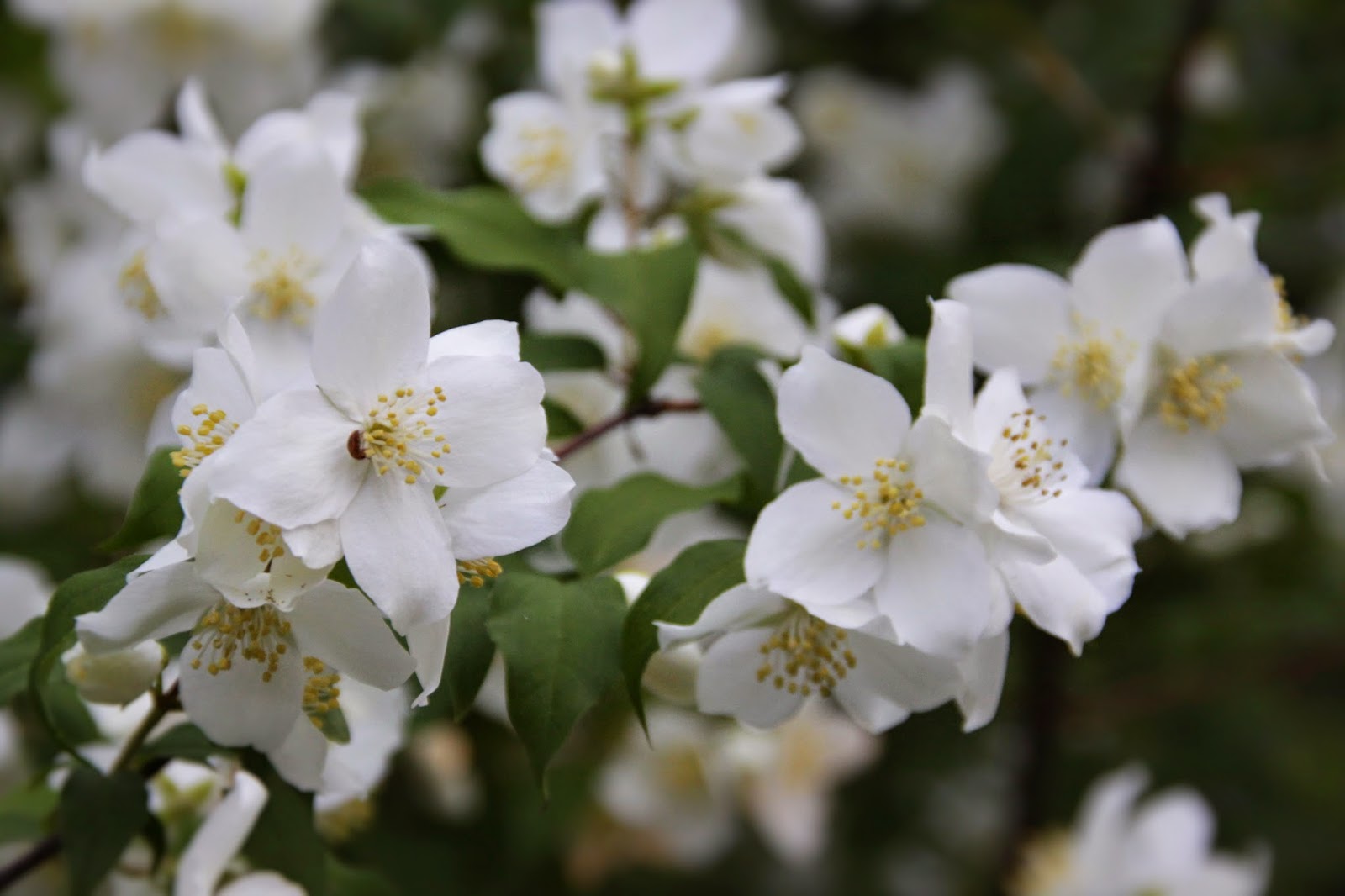 The meadow is in flower right now and it makes you want to have a picnic or just to have a lazy summer day. 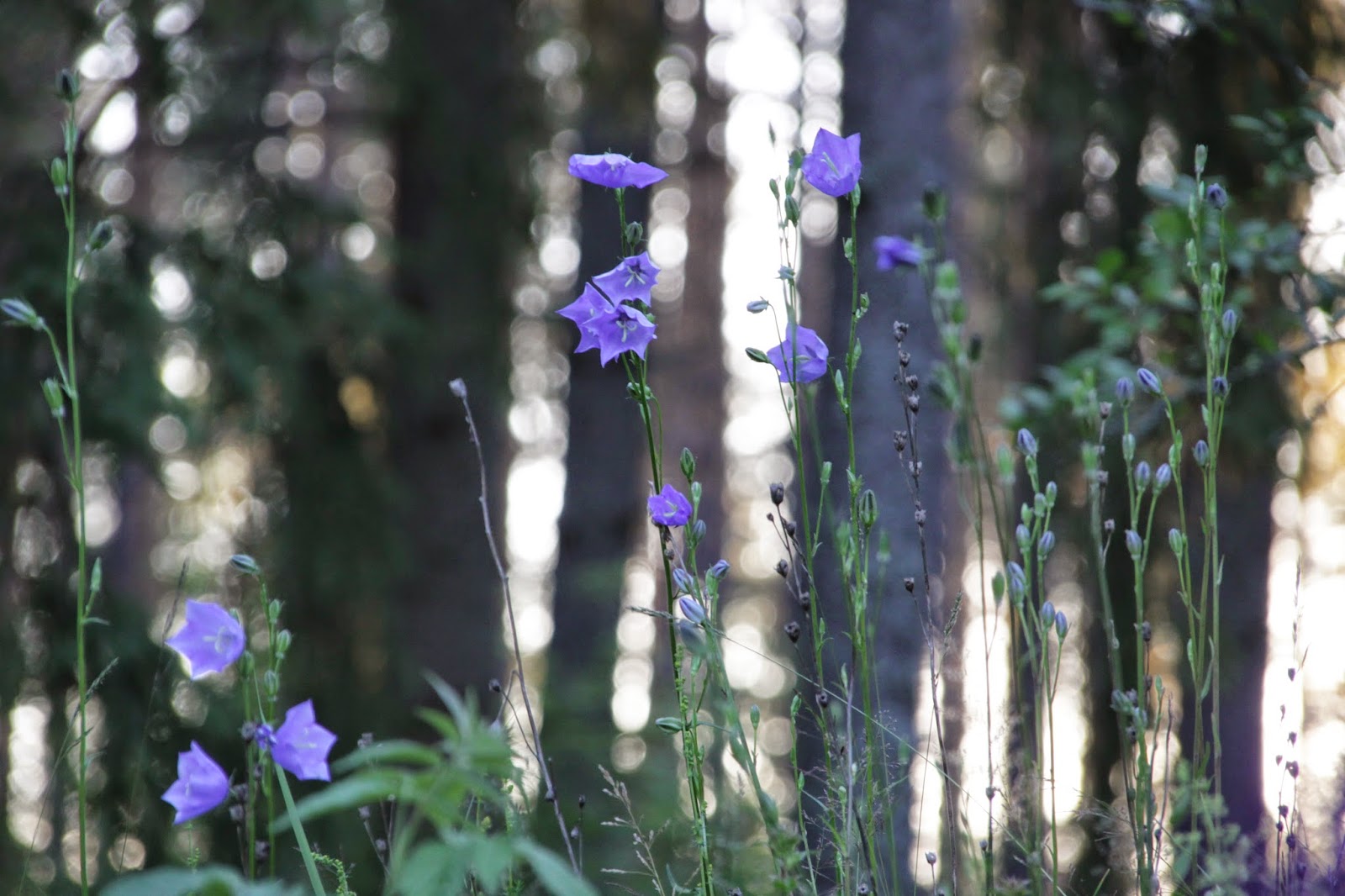 Dare I say it?

It is too hot! I know it has been colder than ever for the last two weeks but I still don't get it why it has to be almost 30 degrees as soon as the sun starts shining. A few days ago the nature was green and lush as in Ireland and now the lawn (read: moss) is more like Sahara desert. 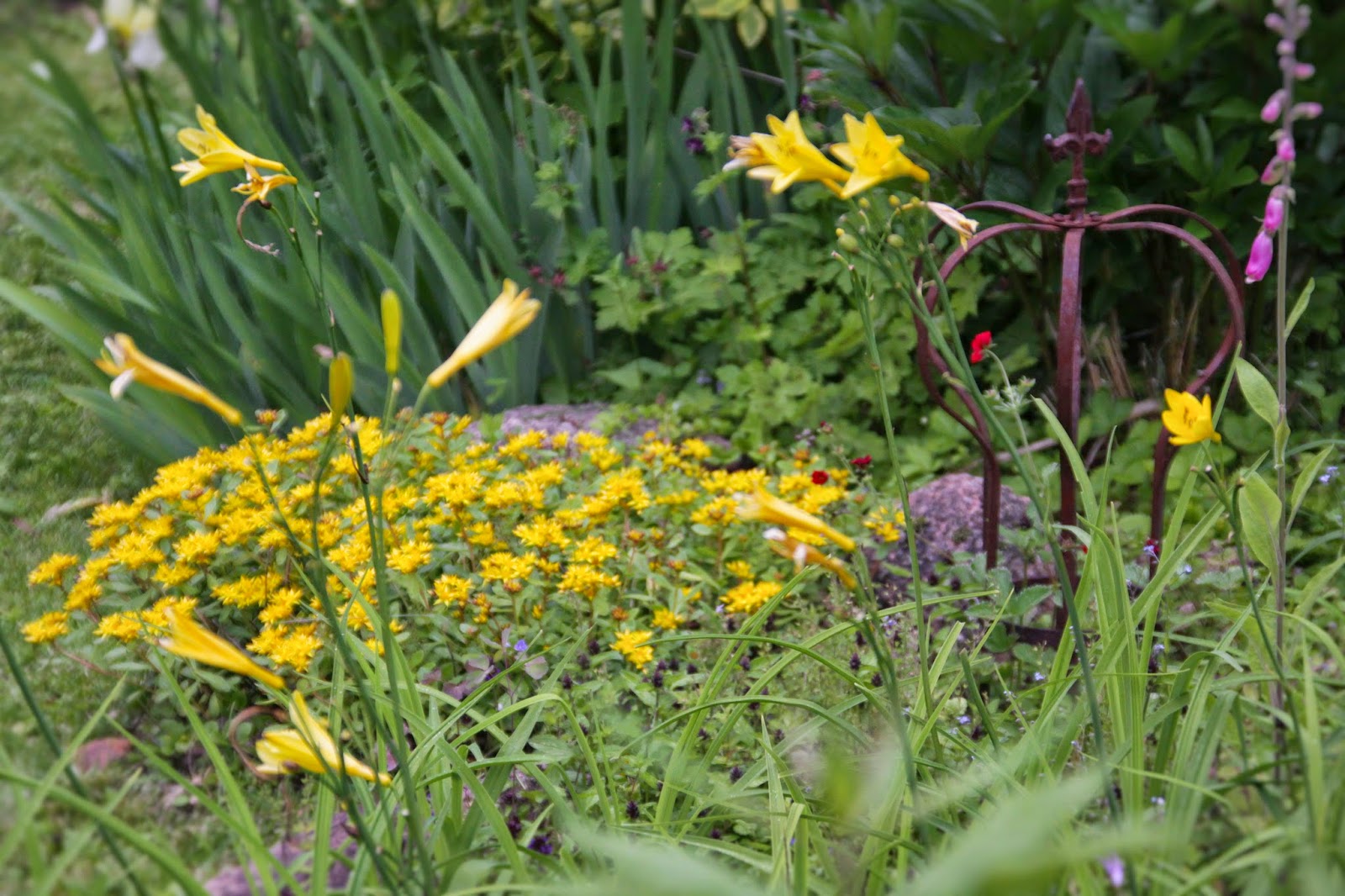 You gotta love summer, even the drying laundry looks great! 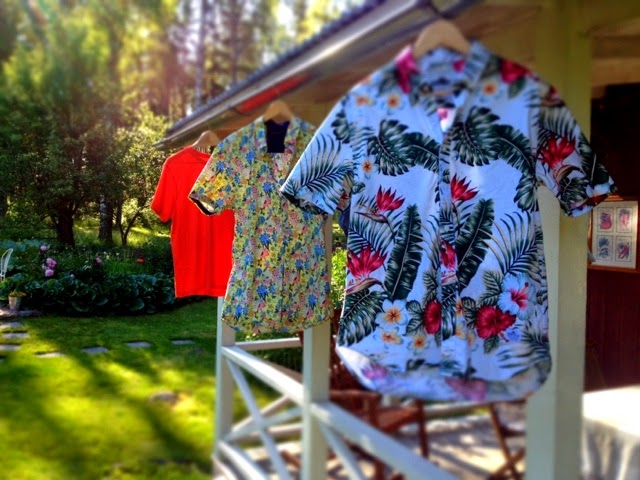 It is nice to have an old (portable) record player at the cottage as you can't listen it too loud. 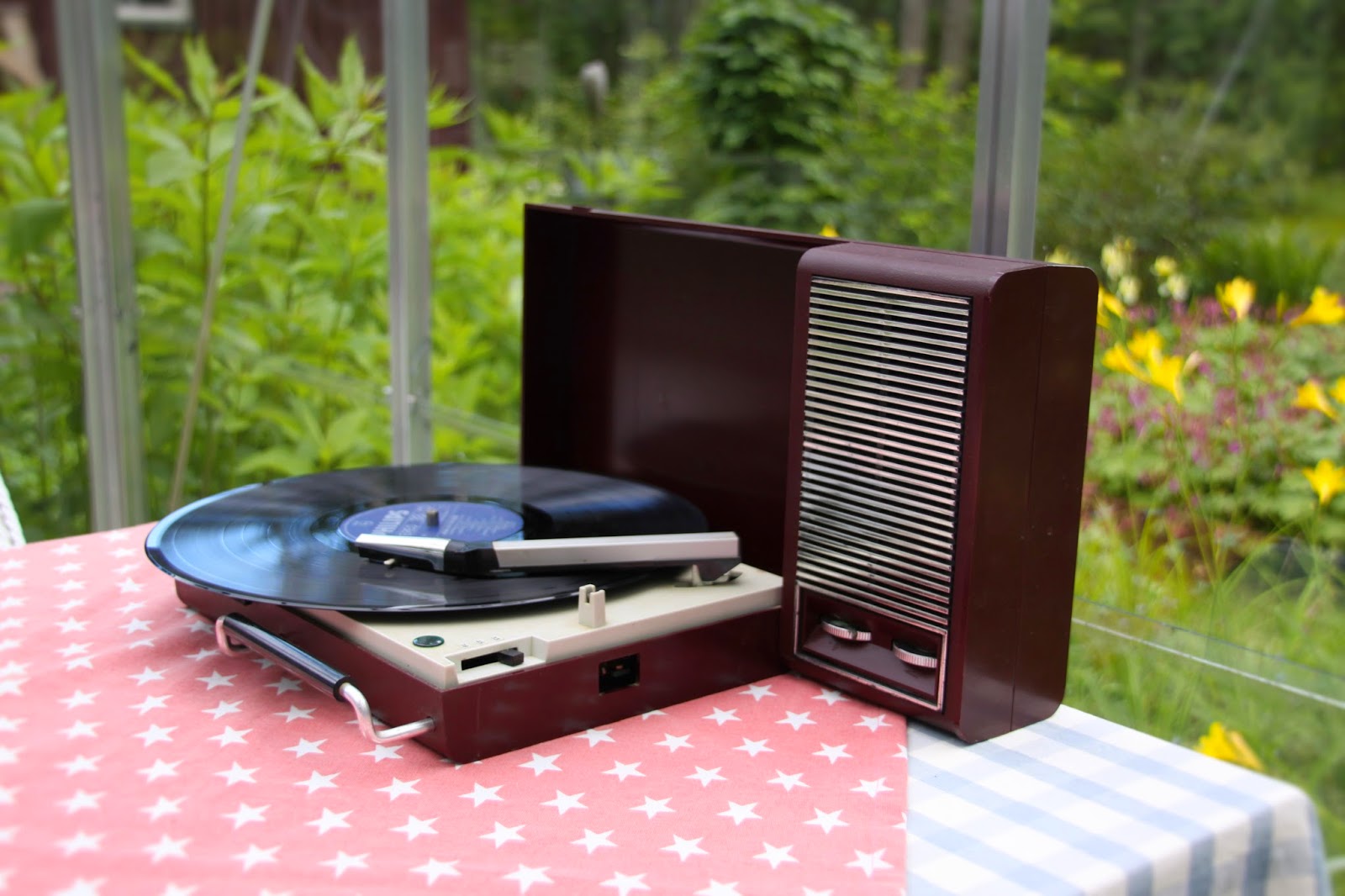 It looks really cute but as it gets older, it will wreak havoc in my garden. What to do as we don't have it in us to kill the hare? 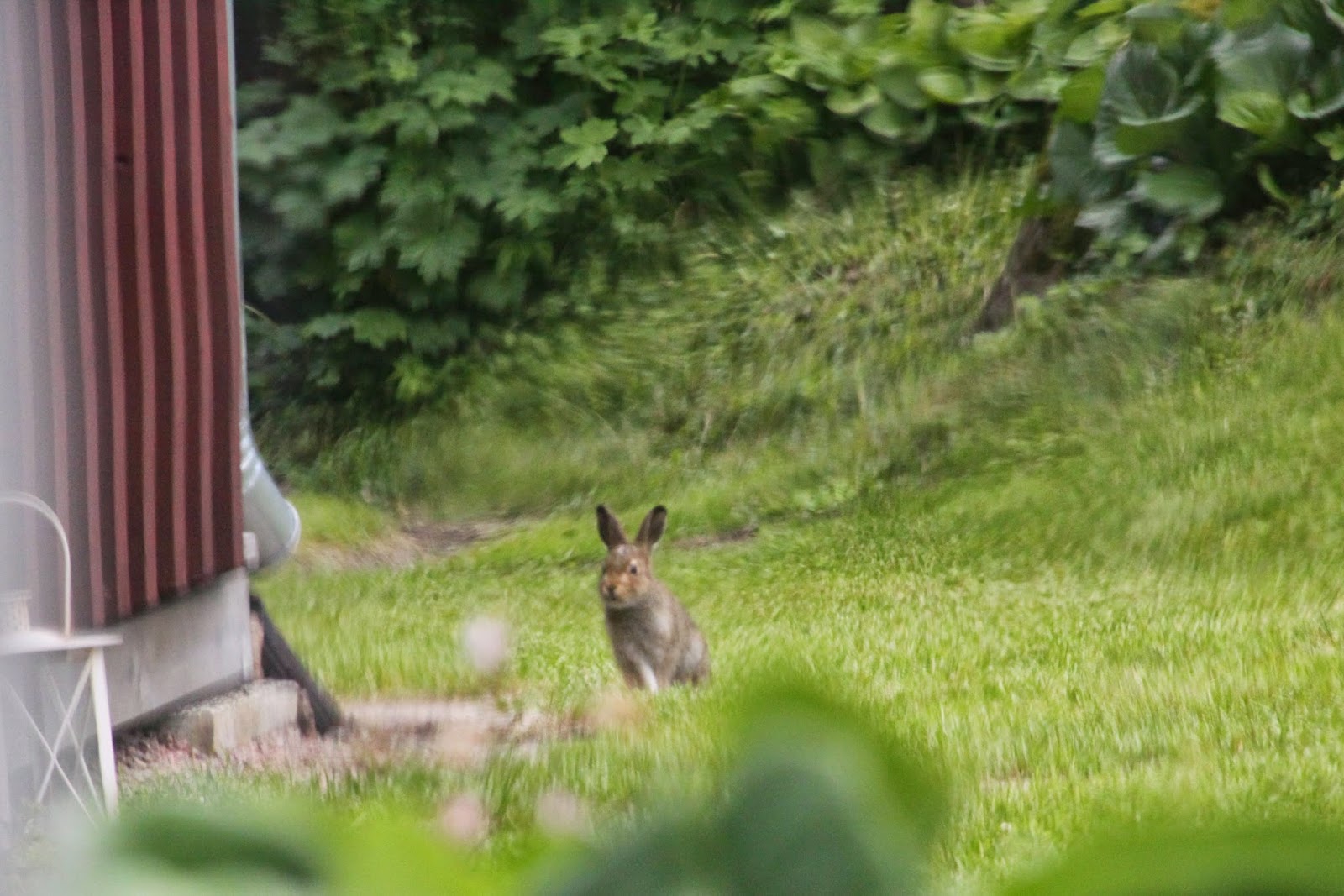